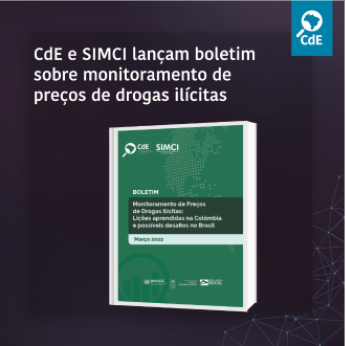 The Center of Excellence for Reducing the Supply of Illicit Drugs (CdE), in partnership with the Integrated Monitoring System for Illicit Crops (SIMCI), a project of the United Nations Office on Drugs and Crime (UNODC) in Colombia, launched this month, a thematic bulletin on the monitoring of illicit drug prices.

The objective of the bulletin is to introduce the issue from a technical perspective, through documented international experiences and, mainly, with reference to the lessons learned in Colombia, within the scope of cooperation with SIMCI.

The publication is part of the Illicit Drugs Market Monitoring Pilot Project, which will be implemented in Mato Grosso, Paraná, Pernambuco and São Paulo. During the project, workshops will be held with representatives of these States to raise awareness of the importance of the topic and provide guidance on the collection, consolidation and validation of data in the regions.

Illicit drug markets are a threat to the development of the territory, and monitoring the behavior of prices, producing agents and the contexts of these markets is a strategy that contributes to the performance of public policy makers.

The CdE is the result of an innovative partnership between the National Secretariat for Drug Policies and Asset Management of the Ministry of Justice and Public Security (SENAD/MJSP), UNODC and the United Nations Development Program (UNDP) in Brazil. The CdE's proposal is to contribute with qualified information on the supply of drugs in the country through the sharing of scientific evidence on illicit markets.

SIMCI is a technological project that, in addition to monitoring the cultivation of illicit drugs for two decades, promotes studies in related areas, having developed a methodology to estimate the price of illicit drugs in different regions of Colombia.

Since 1999, through the use of satellites and field verification, the project has calculated the extent of the areas of illicit coca cultivation and the potential for cocaine hydrochloride production in the country, building historical series that support annual reports on the subject.