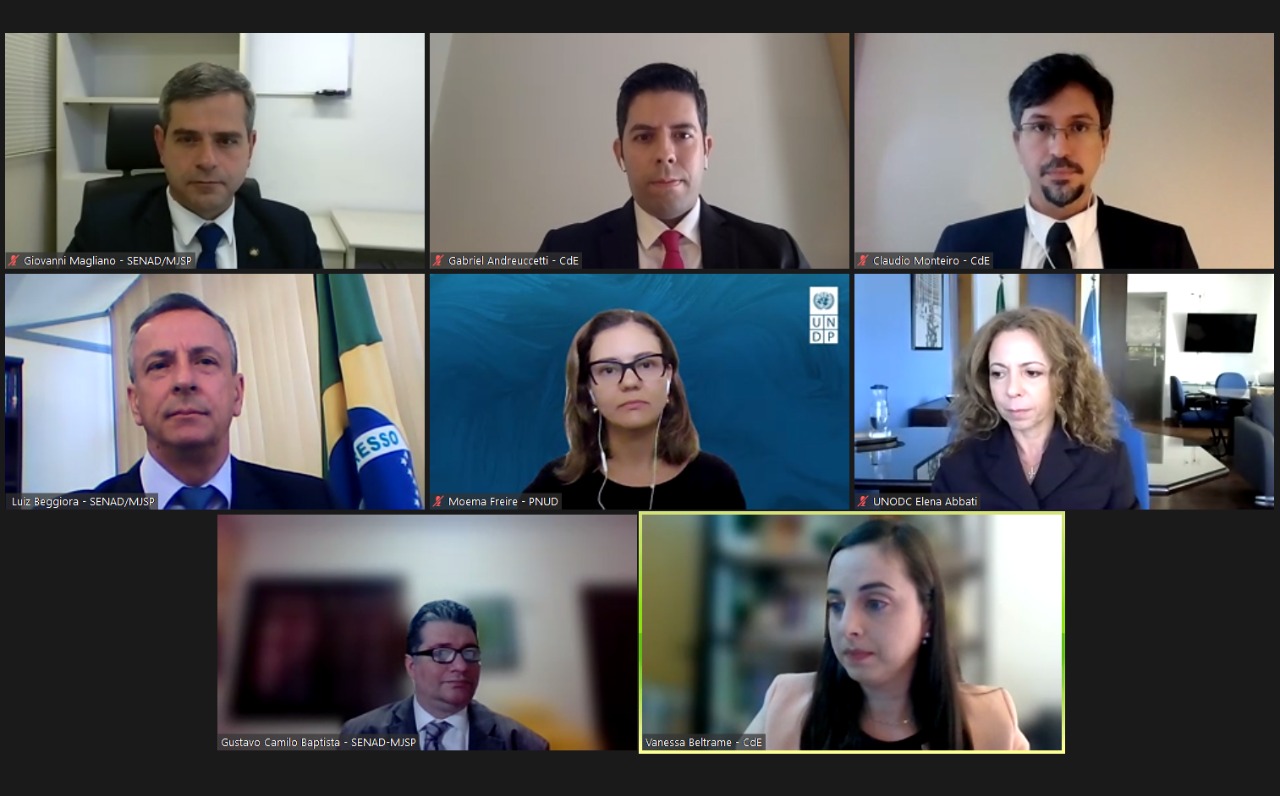 The Center of Excellence for Reducing the Supply of Illicit Drugs (CdE) launched, this Wednesday (2), the first thematic bulletin produced under the pilot project, in an online event broadcast by CdE channel on YouTube. The document addresses the management of drug trafficking assets in Brazil, highlighting how the decapitalization of criminal organizations supports the financing of public policies in the area.

The CoE is an innovative pilot project resulting from a cooperation partnership between the National Secretariat for Drug Policy of the Ministry of Justice and Public Security (SENAD/MJSP), the United Nations Office on Drugs and Crime (UNODC) and the Program for United Nations for Development (UNDP).

During the bulletin's launch event, the National Secretary for Drug Policy, Luiz Roberto Beggiora, highlighted that the topic of asset management was in the background until 2018 in public safety priorities. "SENAD has been, since 2019, advocating a new look at criminal perception, emphasizing not only the criminal, but mainly the patrimonial aspects and the economic effects derived from the practice of crime as a more effective means of combating organized crime," stated Beggiora .

In turn, the Director of the UNODC Liaison and Partnership Office in Brazil, Elena Abbati, recalled the speech she made during the launch of the project, in January of this year. “I emphasized that the Center of Excellence represents an innovative practice, being a neutral and impartial platform for data analysis and information production. And today, when the CoE launches its first thematic bulletin, I can see this proposal starting to materialize”, declared Abbati.

Representing the UNDP Resident Representative in Brazil, Katyna Argueta, the Coordinator of the Unit for Governance and Justice for Development, Moema Freire, highlighted the theme of the bulletin. “The strengthening of drug policies, in relation to human development, is a very important step that the CoE has sought to consolidate in the country, precisely because of the effects that drug trafficking generates for development, not only in Brazil, but in different countries in the world”, completed Freire.

Entitled "Management of Drug Trafficking Assets - Decapitalization of organized crime to strengthen public policies in Brazil", the document focuses on data analysis of the asset management system of the National Anti-Drug Fund (FUNAD), as well as on flows and processes involved in the disposal of assets arising from drug trafficking. In an unprecedented way, the document presents the detailed flow of the management model of assets disposed of in advance, from the seizure of the asset by the police forces to the incorporation of the values ​​by FUNAD.

During the event, the Coordinator of the CoE, Gabriel Andreuccetti, and the Specialist in Asset Management and Financial Intelligence of the CoE, Claudio Monteiro, presented the main results of the bulletin. “We were able to carry out an in-depth analysis of FUNAD's asset management system and we observed that the restructuring of SENAD, its policies and the performance of early sale brought important advances to this area. Through this structure, it was possible to gradually increase the resources from drug trafficking in favor of public policies for prevention and to curb the advance of drug trafficking in Brazil”, said Andreuccetti.

The bulletin points out that, in the auction processes carried out in 2020, aircraft and real estate are the goods with the highest average values ​​collected. Per asset, the average sale value was R$469 thousand and R$315 thousand, respectively. The average value of vehicles was R$ 11 thousand in 2020. Among the types of goods auctioned, vehicles correspond to 57% of the total in 2020.

In 2020, all Brazilian states held auctions, reaching the amount of R$ 40 million. In the first months of 2021, the amount collected is already higher than the entire 2020. This data demonstrates that the change in the law and changes in the form of asset management were disseminated among the States, indicating an evolution in the federative pact process.

Within the perspective of building drug policies based on scientific evidence, the CoE finds its proposal in the dissemination of data, statistics and indicators on the subject in order to promote comprehensive and multidimensional crime prevention strategies aimed at social and economic development, considering social, educational and security measures to foster a people-centred culture of legality.

In addition, by strengthening cooperation between government partners and technical institutions, and based on extensive research and analysis, the CoE will provide subsidies for the improvement of government actions that may result in better understanding and monitoring of drug markets unlawful. Balance 2022: Unpublished studies and strengthening of partnerships mark the actions of the CoE