The covid-19 pandemic has become a major natural intervention in many licit and illicit markets around the world. With travel restrictions and social distancing policies implemented, new dynamics and challenges emerged in different spheres of society and affected the work of institutions linked to the repression and inspection of drug trafficking, as well as the performance of criminal groups in this market.

As part of a global effort to assimilate the changes that have occurred due to the current health crisis, the Center of Excellence for Reducing the Supply of Illicit Drugs (CdE), a partnership between the Ministry of Justice and Public Security (MJSP), the Program of the United Nations for Development (UNDP) and the United Nations Office on Drugs and Crime (UNODC), produced a strategic study on the impact of the pandemic on drug trafficking in Brazil. The report was produced with support from the Department of Research and Trend Analysis at UNODC in Vienna, Austria.

The Head of the UNODC Drug Research Section in Vienna, Chloé Carpentier, explains that the initial goal of the study was to understand, from the analysis of drug seizures, the potential impact of the pandemic on drug markets in Brazil, in terms of changes, imports, exports and trafficking, but also in a regional context. “We are working, in partnership with the CdE, on a complementary analysis focused on the cocaine market for the next year. What we found, in a preliminary way, is that smaller cocaine seizures, weighing less than 200 kg, increased during the pandemic, while larger ones, above 200 kg, decreased,” he said.

According to CoE Coordinator Gabriel Andreuccetti, the Center of Excellence experts, combined with UNODC expertise in Vienna, gathered data from different information sources and integrated these numbers in order to see the drug bust scenario as a whole. . “We observe that criminal organizations have dynamic and flexible structures, capable of constantly adapting, even in the face of enormous challenges such as the covid-19 pandemic. With the integration and analysis of data, the CdE can help build new strategies for public security agents in the face of this ability to adapt from organized crime,” he says. In the publication, an unprecedented map with the main routes of entry, transport and exit of drugs in the country offers information on the dimension of this illicit market. According to the document, there are several routes used by organized crime for drug trafficking in the country, which are constantly changing, and Brazil remains a strategic region for the transit of cocaine - from Andean countries to Europe and to Africa. In addition, during the health crisis, there was strong resilience on the part of organizations that work in drug trafficking, with the capacity to adapt and diversify routes as needed.

Marijuana and drug seizures more than doubled in the pandemic. According to Federal Police data, approximately double the amount of marijuana and its derivatives (hashish and skunk) was seized during the pandemic compared to the previous twelve-month period, an increase of 112%.

Brazil continues as a cocaine export point to other countries and continents. According to data from the Federal Police, a 20% decrease in the amount of cocaine seized was observed during the pandemic period. Even so, there is a high volume of cocaine in Brazil. This confirms that the country is a transit point for cocaine and, although there is domestic consumption, the European market is decisive in the trafficking of this drug.

PROGRESSIVE DISPLACEMENT OF ROUTES TO THE SOUTH

Geospatial analysis techniques employed in the study suggest that drug seizures by police forces show a progressive displacement of marijuana trafficking routes towards the south of the country. In 2020, Rio Grande do Sul presented new clusters that were not present in 2019, showing this convergence. In the north, the cities of Pacaraima and Boa Vista appear as points of origin, probably, for marijuana from Colombia, which reaches the national territory through the hydrographic networks between the southern region of Venezuela and the state of Roraima.

Likewise, in the case of cocaine, Rio Grande do Sul presented, in 2020, clusters (groupings) that were not present in 2019, which also shows a trend of progressive displacement of the route towards the south of the country similar to that of the marihuana. Cocaine transport routes have spread across Brazil and criminal organizations have targeted new destinations in the world.

There has been an increase in seizures of synthetic drugs such as methamphetamine. Data from the Narcotics Testing Center (NEE) of the Criminalistics Institute of the Technical-Scientific Police of the State of São Paulo indicate an increase in the detection of methamphetamine, amphetamine and MDA, with emphasis on the first two, in the comparison between 2019 and 2020, in Sao Paulo City.

Signs of changes in the routes point to the resilience of trafficking. The main routes of illicit drug trafficking, identified from the most recent arrest data from several Brazilian institutions and from other countries, provide a dimension of the problem of the illicit market in Brazil.

Criminal organizations had to adapt to changes in police action. In a scenario of increased inspection, less movement on highways and movement restrictions, interlocutors in the study reported that trafficking needed to entice more people, especially for the role of “scout”, an individual who monitors police work.

To avoid greater losses, drug dealers follow the trend of joining in consortia. According to some police officers interviewed, part of the explanation for the significant increase in seizures was the fact that traffickers got together in small groups, like a consortium, to transport loads of marijuana.

Traffic by digital means remains on the rise. There have also been reports of an increase in the sale of drugs through phone apps, a practice known as drug delivery or disk drugs. In some cases, there was an increase in the police approach to motorcycle couriers.

Some interlocutors reported the implementation of new institutional strategies to combat drug trafficking that coincided with the pandemic. For this reason, it is considered that the results observed in the seizures can be explained both by the health crisis and by the aforementioned institutional actions (for example, the VIGIA Program, of the Ministry of Justice and Public Security; Tamoio, of the PRF and triggered operations by the PF).

The socioeconomic impact of the covid-19 pandemic, with the rise in poverty and other vulnerabilities, may have contributed to the formation of an environment that favored the enticement of more people to work in drug trafficking. Data related to the records of arrests in flagrante, provided by the National Council of Justice (CNJ), indicate the profile of men, black, with low education and with precarious insertion in the labor market as preponderant among prisoners involved in drug trafficking. 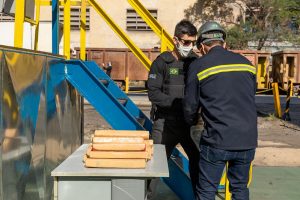