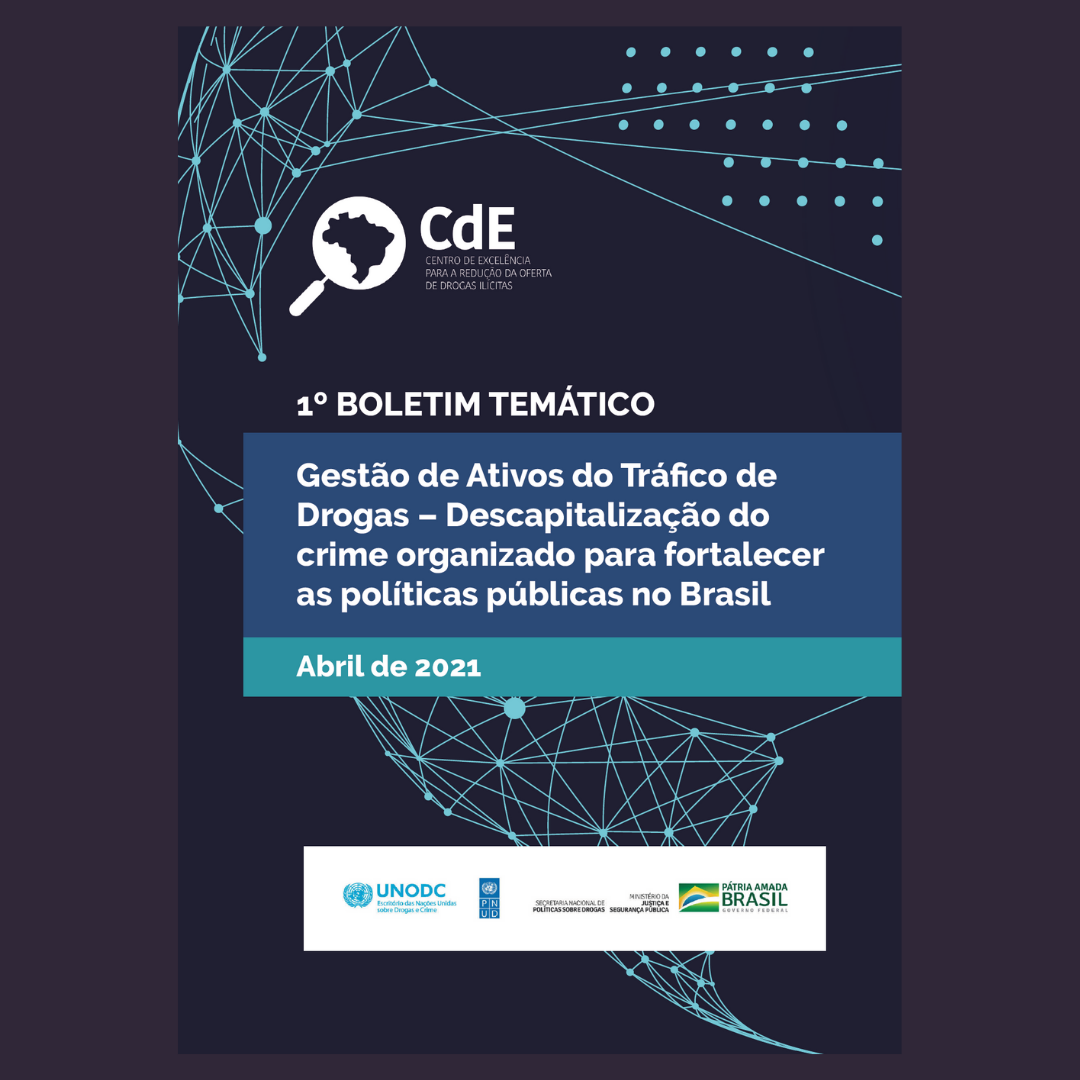 This Wednesday (2), the Center of Excellence for Reducing the Supply of Illicit Drugs (CdE) launches the first thematic bulletin produced under the pilot project, in an online event broadcast on CdE channel on YouTube.

Entitled “Management of Drug Trafficking Assets – Decapitalization of organized crime to strengthen public policies in Brazil”, the document presents promising practices on the international scene and points out that Brazil has aligned itself with global experiences in combating drug trafficking. One of these strategies is the financial disarticulation of criminals through the confiscation of the assets acquired with the illicit enrichment and the reversal of the seized assets in favor of the Union to invest in policies to prevent and combat drugs.

To make the auction of goods confiscated from traffickers feasible, one of the first steps is to complete the process of documentation and essential information, such as the location of the good. Without this documentary validation, it is not possible to proceed with the sale process. To expedite these obstacles, the National Secretariat for Drug Policy (SENAD/MJSP) launched the Check In Project in October 2019. The online platform made it possible to locate confiscated items across the country by entering data made by police officers who work in the places that store these goods. This was considerably reflected in the significant increase in auctions. In 2020, more than R$ 40 million were collected. In 2021, until the month of May, the collection has already exceeded R$ 53 million.

This is the case of a Ferrari California, seized from the international drug trade in Santa Catarina. Valued at R$ 659 thousand, it was sold for R$ 880 thousand at the end of May. Among the types of goods auctioned in 2020, vehicles correspond to 57% of the total.

“What we observed through this deeper look was that SENAD's restructuring strategies, the hiring of auctioneers and the legislative improvement of the national drug policy, particularly through the instrument of anticipated alienation, has been contributing to a gradual increase in the decapitalization of organized crime, which has resulted in increased resources for FUNAD and, consequently, in a greater contribution to public policies”, explains the coordinator of the CdE, Gabriel Andreuccetti.

The CoE is an innovative pilot project resulting from a cooperation partnership between the National Secretariat for Drug Policy of the Ministry of Justice and Public Security (SENAD/MJSP), the United Nations Office on Drugs and Crime (UNODC) and the Program for United Nations for Development (UNDP).

Within the perspective of building drug policies based on scientific evidence, the CoE finds its proposal in the dissemination of data, statistics and indicators on the subject in order to promote comprehensive and multidimensional crime prevention strategies aimed at social and economic development, considering social, educational and security measures to foster a people-centred culture of legality. In addition, by strengthening cooperation between government partners and technical institutions, and based on extensive research and analysis, the CoE will provide subsidies for the improvement of government actions that may result in better understanding and monitoring of drug markets illicit activities.

CoE hires assistants in the areas of Communication, Data, Statistics and Research