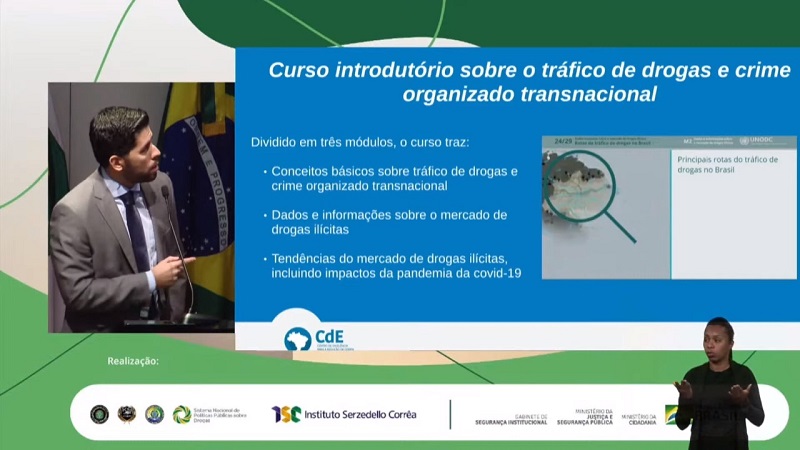 Brasilia, June 22 of 2022 – International cooperation and the importance of the elaboration and execution of integrated actions were themes that marked the exhibitions of two parallel events promoted within the 24th National Week of Drug Policies, the “IV Intersectoral Seminar on Prevention, Awareness and Fight against Drugs​” and the “II Forum on Integrated Protection of Borders and Borders”.

At the opening of the meeting, the National Secretary for Drug Policies, Paulo Gustavo Maiurino, highlighted the importance of integrating actions and policies. “This year, Brazil will have the 1st National Policy Plan on Drugs, Planad. This unprecedented initiative by the Federal Government integrates a series of good practices and an action plan to combat drug trafficking, in a clear redirection of drug policy in the country. This happens with the inclusion of the population, specialists from different agencies and the federal government, joining forces and a serious debate to face the problem”, said the secretary, who represented the Minister of Justice and Public Security, Anderson Torres at the event.

This Wednesday morning (22), in the panel “Drug Policies in Brazil and International Articulation”, the fundamental role of using data and concrete evidence as a subsidy for the construction of public policies was emphasized. UNODC was represented by Gabriel Andreuccetti, coordinator of the Center of Excellence for Illicit Drug Supply Reduction (CdE).

Andreuccetti highlighted the work of the CdE, which is the result of a partnership between UNODC, the National Secretariat for Policies on Drugs and Asset Management of the Ministry of Justice and Public Security (SENAD/MJSP) and the United Nations Development Program (UNDP). ).

“The objective of this partnership was to combine with the work of the Brazilian government the scientific framework that UNODC, which is based in Vienna, brings around the world, in several countries, in the production of evidence on drugs. A partnership that begins at the end of 2020 with the main objective of equipping SENAD in the preparation of studies and analyzes on trends and threats posed by different illicit trafficking and transnational organized crime”, detailed the CdE coordinator.

In addition to presenting the main studies of the Center of Excellence, Andreuccetti announced the availability of the first module of the “Introductory Course on Drug Trafficking and Transnational Organized Crime”, an initiative created in partnership with the UNODC's Global eLearning platform.

Online course
Entitled “Introduction to the topic of drug trafficking and transnational organized crime”, this course module covers the following topics: main international agreements to which Brazil is a signatory; Brazilian drug policy legislation; Illicit financial flows and challenges for Brazil in the transnational drug market; data on drug supply in Brazil and at a regional level; New Psychoactive Substances (NPS) and how Rapid Alert Systems operate; how Brazilian authorities respond to cross-border crimes related to drug trafficking; as well as how the assets seized from drug trafficking are managed and used to finance public policies on drugs in Brazil.

This first part of the course will be available for access starting next Friday (24), on the platform UNODC Global eLearning. The course will have two more modules, which will be released soon, and people who complete it will receive a certificate issued by UNODC.

In the afternoon, the CdE participated in the panel “Emerging Issues on Repression of Drug Trafficking” with a presentation on the main trends identified in the illicit drug market resulting from the impacts of the Covid-19 pandemic. Gabriel Andreuccetti discussed results and data from the strategic study “Covid-19 and drug trafficking in Brazil: the adaptation of organized crime and the role of police forces in the pandemic”. The survey was prepared by the CdE and data collection was possible through collaboration with various public security institutions at the federal and state levels.

In the case of cocaine, for example, the spread of trafficking routes from Brazil towards other countries, the internalization of routes when the gaze turns to Brazilian states, in addition to new destinations, were some of the trends identified.

“Another aspect that draws attention is the increase in the seizure of synthetic drugs. Traffic through digital means remains on the rise, in addition to the use of cryptocurrencies, and it seems that the pandemic has served as a real catalyst for these dynamics”, noted the CdE coordinator.

This and other CdE studies can be accessed on the Center of Excellence website: www.cdebrasil.org.br.

On the event
The 24th National Drug Policy Week takes place on June 22 and 23, in the auditorium of the Federal Audit Court (TCU), in Brasília. The joint initiative is from the Ministry of Citizenship, through the National Secretariat for Drug Care and Prevention (SENAPRED), and the Ministry of Justice and Public Security (MJSP), through the National Secretariat for Drug Policies and Asset Management ( SENAD). The National Drug Policy Week was established by Law 13.840, of June 05, 2019. The week was chosen because it alludes to the International Day against Drug Abuse and Illicit Trafficking, celebrated on June 26.